Debora and Michael’s dinner guests are late. About one year late. That’s because it’s taken all this time for the couple to even dare to come face to face with Tamara and Bill, and their teenage son Curtis – the bully they believe is responsible for the suicide of their own son Joel.

For Debora and Michael, tonight is a nerve-racking step towards coming to terms with their loss; for Tamara and Bill, it’s a meeting they’ve been dreading but never expected to ever happen; and for Curtis, it’s going to be the worst dinner of his life.

Redemption, forgiveness and closure are on the menu, but first they all have to get through the main course of blame, shame and retribution. As everyone takes a turn in the hot seat for their real or imagined role in the tragedy, painful accusations are served and shocking secrets are spilled. And all through dinner, the spectre of Joel looms over a night that will change everyone’s lives forever.

Chillingly comic, nail-bitingly tense and provocatively polarizing, LATE COMPANY shines a stark light on our mutating 21st century society and volatile youth culture, and asks the urgent question: are we too late?

“Blistering drama...Director Tracie Pang allows the play to unfold with a quiet ferocity that keeps us rapt. Flashes of rage catch one almost by surprise while tender moments leave one fighting back tears.

A lot is said by the end but it's what remains unsaid that rings in our ears. The decision to localise the setting is also terrific. Late Company is a fine example of how text and performance fuse together to create truly compelling theatre.”

“Pangdemonium has a strong track record of producing quality domestic dramas, and Late Company ranks among their best. Kudos to director Tracie Pang for pacing Late Company to perfection; under her direction, there are emotional moments that catch one completely by surprise. The localisation of Late Company has also been effectively carried out making its themes and narrative feel immediately relatable and urgent to the Singaporean audience.

Above all, it is the efforts of the talented cast that makes Late Company as arresting as it is. Poignant, gripping and fiercely relevant, Late Company is a powerful, moving production that will leave you devastated, and is essential viewing. This is important, socially impactful work that delivers on all fronts, from production value to performance to a smorgasbord of lessons and thoughts audiences will take away.”

“Director Tracie Pang and the team of actors are stellar, delivering Tannahill’s fervent text with precision and charm. It is a combination of ruthlessness and vulnerability that the characters and actors display that makes this play a real masterpiece. Late Company is a must-watch play that checks all the right boxes. The text and visuals are in perfect harmony, and yet they leave a mark much deeper than can be articulated.”

“Late Company holds so many elements and topics of discussion, thanks to Director Tracie Pang. The performance of the cast is beyond stellar. With an amazing cast and production team, Late Company is a play that will stir your emotions and keep you at the edge of your seat in anger and sorrow.”

“Pangdemonium has displayed a real knack for staging handsome productions with socially relevant themes that resonate with audiences and Late Company is the latest example of its winning formula.”

“The stellar cast marvellously embodies the different perspectives of the heartbreaking incident – both attached and detached – bringing audiences along for a rollercoaster ride filled with waves of laughter and tears.” 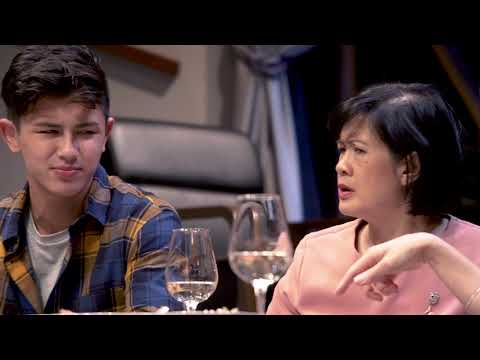 “I can't tell you enough how proud I am of the show. As I have been telling my friends and family, I really do think it is the most accomplished and fully-realised version of the play to date. I was deeply impressed and felt very honoured by it.”

“Late Company is a phenomenal piece of theatre which examines the issue of bullying today. It was tremendously moving and harrowing to watch at the same time...

The stellar cast Karen Tan, Adrian Pang, Edward Choy and Xander Pang held it together tight and told us an important story which reminded us that we have to keep talking to our children and those around us who may be in pain.”

“This production was so, so moving. I quietly sobbed from the table setting to the very end…even through the laughter. The performances, words, set, lighting, everything was brilliant. Thank you so much for this experience.”

“An awkwardly brilliant play filled with emotions, #latecompany is about #cyberbullying and its possible consequences, finding closure, and in the process, inevitably and desperately trying to find someone or something to blame and coming to terms with our fears, faults and flaws. Another excellent one from #pangdemonium”

“Wow. @pangdemoniumtheatre’s Late Company was intense, saturated with emotion beneath all the polite talk. The play also brought a lot of topics to the surface, that might take awhile to absorb and reflect. A wonderful performance by the cast - I felt every sentence and wave of emotion from all the characters on stage.”

“I have this habit - of not finding out what I am watching whenever I step into a theater for any @pangdemoniumtheatre production...because they are always that good and I love that element of surprise and suspense I allow myself. Late Company - starring Janice Koh, Karen Tan, Adrian Pang, Edward Choy and Xander Pang, all brilliant in their own roles, element and headspace. Thought-provoking, utterly sobering, gripping and powerful - peppered with light hearted moments that make you realize life is indeed one whole tragedy with pockets of golden moments.”

“Once again Pangdemonium brings a phenomenal, gut-wrenching, relevant and very important piece of theatre to Singapore. Go watch #LateCompany. This one really hit home for me. Thank you.”

“So glad I managed to get last minute tix for Pangdemonium's Late Company. Giant bouquets to the entire cast—Adrian Pang, Janice Koh, Karen Tan, Edward Choy and Xander Pang—for their electrifying performances. A powerful, relevant script and great direction too. If I were a tissue-selling uncle or auntie, I'd head straight to the Victoria Theatre ahead of tonight's final performance, because the audience WILL NEED SEVERAL PACKETS EACH. The folks around me were sniffling so much, there must be pools of snot on the theatre floor.”

“I didn’t know that to expect from watching a local production for the first time and little did I know that Late Company by Pangdemonium would resonate so deeply. Glad that this was the first of many plays I will be supporting. Kudos to the great cast for bringing awareness about depression and the realities of bullying to the crowd.”

“My mind is still swirling from Pangdemonium’s latest production. My husband and I spent our journey back to our kids, talking. About bullies, getting bullied and being different. My hubby and I have not reached common ground - many questions with very few answers. But we agree to leave the channels of communication open and wide. With each other and with the kids. And to keep talking. Thank you Pangdemonium for always inspiring us and prompting us to confront difficult topics.”