“Fight for the right to pee for free,

In a fictional “most expensive city in the world”, a “cross-border water crisis” has led to a government ban on private lavatories. The woeful water shortage sees the erection of pay-to-pee public toilets operated by an all-powerful corporation, Urine Good Company, owned by the megalomaniac Caldwell B. Cladwell. Breaking the laws against gratuitous public peeing means urination ruination, with offenders being exiled in the dreaded and mysterious “Urinetown”, never to be seen again.

When threatened with yet another pee-fee hike, the poor citizens, having endured overwhelming oppression and bursting bladders, can no longer hold it in, and stage a revolution, led by a handsome hero with the heroically handsome name of Bobby Strong. And, in true musical theatre style, he still finds the time and energy to fall hopelessly in love with the honeylicious Hope Cladwell, who (shock! horror! spoiler!) turns out to be the daughter of the dastardly Caldwell B. Cladwell!

Will our Number One hero save the day and bring relief to the people? Maybe!

Will love be dealt a royal flush against evil? Possibly!

Will there be more toilet jokes? You betcha!

Pangdemonium is thrilled to be celebrating the 20th anniversary of this unique musical, which catapults musical theatre into a new dimension, with its demented (but uncannily familiar) depiction of a dystopian world, a playlist packed with outrageous songs, and a cunning knack of making you laugh ‘til you wet your pants.

“Pangdemonium’s hysterically funny satire is the most fun this reviewer has had at the theatre in the past six months…with pitch-perfect direction form Tracie Pang….

“Kudos to the entire cast, who were amazing…Mina Kaye and Benjamin Chow really sold the show with their vocals…one of the funniest musicals you’ll see, this is not one to miss.”

“A powerhouse of a production from Pangdemonium at their peak with an all-round superb ensemble in this fun romp to end off their season.”

“Director Pang has assembled a juggernaut of a team that boasts a wonderful mix of old collaborators and new faces. 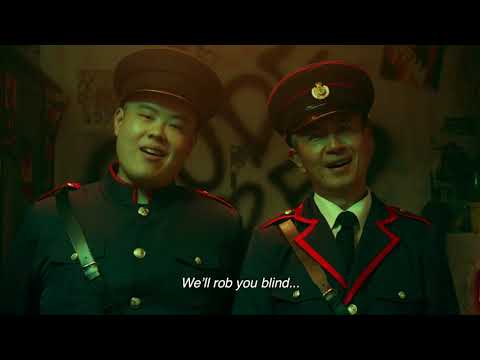 “Pangdemonium, you sell drinks in the lobby, make a whole show about peeing, and then make us laugh SO hard for two hours. My condolences to the cleanup crew. Thank you for an absolutely brilliant show. I’ve never been so happy pissing myself.”

“A stellar cast with all my favourites. I have been following Pangdemonium for several years, and whatever they do, from drama to comedy to musicals, is world class.”

“One of the most awesome shows I’ve seen in 10 years attending events in Singapore - a huge CONGRATS to the entire Pangdemonium team on this roaring success!”

“Thank you for such an enjoyable night. The show was sensational, very fun, highly entertaining, and the musical pieces and choreography were absolutely amazing.”

“Another brilliant piece by Pangdemonium! Funny and classic truly ending this Season with much to think about in our world today! Looking forward to the 2020 Season!”

“Another stellar production from the good people at Pangdemonium. This season’s offerings have been wonderful, with layered explorations of many social issues. Thank you for consistently making us think and feel.”

“If you haven’t seen this amazingly hilarious production of Urinetown, you are missing out BIG! We absolutely LOVED THE SHOW! The team led by the incredible Adrian and Tracie Pang is outstanding! You will be in stitches. Funny, witty, entertaining, sparkling, original and ingenious. We were blown away by the calibre of the cast. Everybody should have a part of the theatre in their life and we are looking forward to the next season.
”

“Getting to this standard didn’t come easy. Some would’ve said we’d never get there: our talent pool & audience are too small. But everyone persisted. There’s this absurd, admittedly patriotic, pride that wells up at how well this troupe of mostly Singaporean actors has done this.
”

Get your Pangdemonium 2020 Season Ticket now!