“This is not about how much you love your son.
It’s about protecting him.
In these circumstances, love is not enough.”

Nicolas appears to be your average 16-year-old – sullen, silent, and secretive.

Except it seems like only yesterday that he was a happy, lively boy with a bright future, and a smile that would light up the room.

Shuttling back and forth between his divorced parents, Pierre and Anne, his behaviour becomes increasingly erratic: Pierre’s new partner Sofia observes that Nicolas is “ultra-weird”; Anne confesses that he “frightens her”; and Pierre defends him as “just being a teenager”. All Nicolas can offer as an explanation is that “life is weighing him down”.

What is causing his dark moods? How come he’s so angry? When did he start lying? What secret is he harbouring? Why is he hiding a knife?…

As Nicolas’ mental and emotional state spirals into a black hole, it starts to take a heavy toll on everyone. At their wit’s end, his parents are left with no choice but to consider desperate measures – which could either be the miracle they all need, or the one thing that will tear them all apart.

Written by Florian Zeller (playwright of The Father, which Pangdemonium staged in 2018 in a sold-out run), The Son is in many ways a spiritual companion piece to our highly-acclaimed 2019 production of Late Company. A brutally honest drama that will leave an indelible mark on your heads and hearts, and a timely exploration of urgent mental health issues among our youth, this is a story of one family – and, in fact, a story of so many families – struggling to save a lost loved one, where, sometimes, love is not enough.

“The Son encapsulates the fantastic work Pangdemonium has been creating over the decade, shows that not only entertain but which seek to proactively tackle important social issues with empathy. This is essential, nourishing theatre…Adrian Pang paring himself down to unravel naked, conflicted emotions...He is ably matched by Zachary Pang. The chemistry between the pair is electric…The sensitivity and nuance that Tracie Pang brings as a director - we truly see her skill as a theatre-maker.”

“A poignant play shedding light on the ever-increasing problem of mental health issues in society, and leaves an indelible mark on us with its message...Adrian and Zachary’s strong chemistry and stellar performances...Tracie Pang manages to capitalise on the dramatic moments to deliver maximum impact and emotion, skilfully executes Florian Zeller’s whiplash-inducing twists.”

“A disquieting, uncomfortable look at mental health issues among the young, its associated shame and stigma...a stellar, nuanced performance by Adrian Pang, who skilfully navigates the many emotional registers, which gave tremendous depth to his character. Pang's heartbreaking performance here was a masterclass in acting.”

“This is a play and a production that simply has to be seen - harrowing and possibly even traumatic. Stimulating, expertly acted and beautifully produced. Excellent directing from Tracie Pang.” 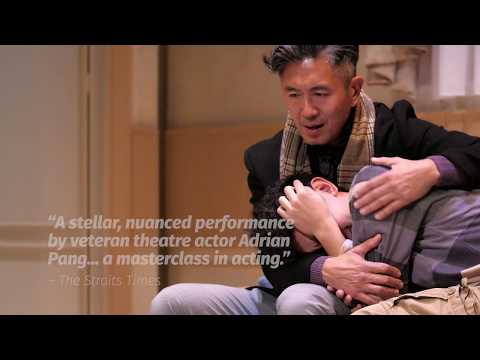 “Adrian Pang and the cast of The Son were amazing. Great direction by Tracie Pang and the actors did a stellar job, including Zachary Pang who displayed much depth and maturity in his role. It was cathartic and at the same time gut-wrenching to watch this play. We have so much class and depth in our local theatre - if you start going, you will realise that there is a treasure trove of great theatre right here in Singapore. I may be a musician but watching and beholding the other art forms in Singapore that are now at very high levels, makes me a better musician. Another inspiring evening. Thank you Pangdemonium!”

“Was at your show tonight, and by the end of it, I was floored by the brilliant performance and haunted at how close I had come to a mirror through Nicolas’ journey. I came expecting to watch a good play, and I left feeling seen and heard, and not alone. Thank you and the team for putting together such an important production that, while difficult, is most necessary, and I am affirmed that the theatre is where truth really exists. I can safely say that The Son has changed my life. Thank you.”

“Pangdemonium delivered a stunning show…again. Seriously the best value theatre in Singapore that demands attention. Pangdemonium's Season Pass - you get a great intimate seat in three carefully curated contemporary and classic shows that are guaranteed to inspire conversation, touch your heart and tickle your funny bones. And every show has a relevant message that has the power to shift. This is the power of great theatre, and The Son is one such show. Powerfully brilliant.””

“So thankful we managed to catch The Son. It hit way too close to home. I was ugly crying throughout, but dammit, Pangdemonium, you guys hit it out of the park again. Thank you for speaking our stories with such truth and accurate portrayals. Thank you for shedding light on issues our society at large has such a hard time understanding. If you ever wondered why we need theatre and the arts, this is why.”

“Pangdemonium’s The Son is proof that the theatre scene in Singapore is strong and well worth a bigger fan base. Pangdemonium really ups the limits with this story and this topic. They aren’t afraid to really go hard and push the senses of the audience. To me, that’s what makes them worth every penny.”

“Pangdemonium’s The Son left me a complete mess. A good mess. The theatre’s ability to speak for those who are silent, represent those who are seemingly forgotten and to bring the masses to relate to another part of society, never fails to awe me. To the team of The Son - you guys are AMAZING and deserving of a standing ovation. The acting, the set, the execution was close to perfect. Thank you for giving life to something so wonderful and meaningful. We are blessed to be part of the audience.”

“This is not a shout-shout. This is me pleading with you to watch Pangdemonium’s The Son. Confronting, heart-breaking and so damn important. Thank you Tracie Pang and team for doing this.”

“Watched The Son tonight, and holy shit I was not prepared for it. Is was a very raw, believable and moving performance. The cast’s outstanding performance made me forget I was in a theatre. Too good for words and hard to forget. It left me with much to think about. A soul-nourishing experience.”

“Riveting acting, bringing to life the struggles a parent faces helping a loved one with depression. And even better still accurately portraying the symptoms a person depicts with depression. Had me glued to my seat. Laughter, sadness, tears, anger…Never thought a play could make me flabbergasted. Never thought I could use that word to describe my astonishment of experiencing a gamut of emotions evoked from the stage.”

“Pangdemonium continues to push the boundaries of theatre and I love it. Wonderful cast, an innovative and beautiful set, great lighting, and above all, sharp delivery of an important message.”