Peter and the Starcatcher

Winner of five Tony Awards, Peter and the Starcatcher is a hilarious, hair-raising, and heartwarming prequel to the Peter Pan legend, and a celebration of the innocence, imagination and resilience of the Child.

Singapore, 1885: we join Molly (a precocious young Starcatcher-in-training) and three orphan boys on a secret mission – a perilous voyage across seas infested by treacherous pirates, fearsome savages, and dubious mermaids, to a faraway island ruled by an evil king. All for the sake of the mystical, mythical “starstuff”, a celestial substance so powerful, it must never fall into the wrong hands. With the dastardly Black Stache in hot pursuit, the vengeful Fighting Prawn and Hawking Clam lurking in the deep, and the mysterious Mr Grin hungry for his next meal, will the children survive the dangers, find the elusive Neverland and live happily ever after?

Featuring a dozen actors portraying more than 100 unforgettable characters, Pangdemonium’s production of Peter and the Starcatcher will be specially adapted to an Asian setting, and is also the company’s very first family show! Full of wit and wonder, colorful characters, and fabulous musical numbers, this is an exhilarating, magical adventure for everyone from 7 to 107, and a timely statement on empowering every child with self-belief, courage and hope.

“Peter and the Starcatcher is at its heart, a raucous celebration of boyhood and youth, manifested through the soulful, madcap performance put on by the stellar cast. It’s a magical play that transports you from dreary Singapore to the lush jungles of Neverland in the blink of an eye, makes you wish you never grew up!

It is the perfect send-off to end Pangdemonium’s 2018 season, leaving us nothing but enraptured with all the hope and wonder of a child again.”

“Take imaginative production design (set by Philip Engleheart, lighting by James Tan), add a cast from the who's who of Singapore theatre and the result is a top-notch rollicking production... clever, creative and delightful.”

“A rope is the sea, a mop is a cat, a man is a woman and simply everything makes you smile. The interplay of the whole ensemble is impeccable, the theatre stage craft is divine, the lighting is sublime, the live music is fantastic!”

“Pangdemonium’s Peter And The Starcatcher is a joyous laugh-a-minute treat... The cast is near-perfect, the production design is dazzling and director Tracie Pang adds localised, contemporary touches to keep you very entertained. We’ve rarely seen a cast and crew work this hard - trust us on this, we’ve seen a lot of plays.

An inventive adventure story for adults and older kids.”

“Director Tracie Pang and her creative team have put together a magical treat that keeps the audience enraptured throughout...working wonders in transporting us headlong into this wacky, wonderful world...fantastic work from the ensemble cast who play a veritable spectrum of characters with audacious physicality.

Scenes are conjured up using the simplest of props, giving the production an endearing, rough-and-tumble charm...a fun-filled voyage to round off the year and Peter and the Starcatcher is certainly a production bound to leave a smile on one's face, regardless of age.”

“Imagination is empowerment, and Peter and the Starcatcher directed by Tracie Pang joyously screams a celebration of innocence and of the very best of our childhood...the cast was wondrously bursting with energy and entertained audiences in every moment, with humorous, satirical remarks sending the entire audience into uncontrollable laughing fits, Peter entertained in every moment.” 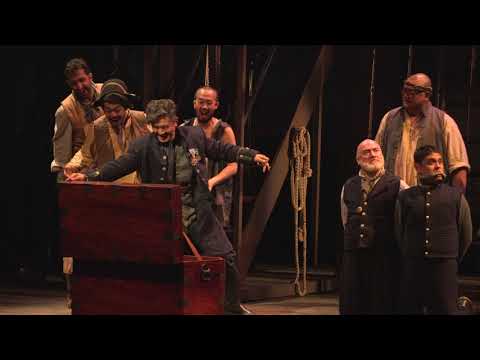 Author
A Play by Rick Alice;  Music by Wayne Barker; Based on the novel by Dave Barry & Ridley Pearson

“Just had THE MOST MAGICAL experience in the theatre. Thank you Pangdemonium for showing us how blissful, crazy, simple and yet mind-blowingly beautiful the magic of theatre can be. BRILLIANT ensemble dynamics where everyone held the show up collectively. A show like this just makes you wanna stand up and shout YES! THAT'S WHAT I'M TALKIN' 'BOUT, PEOPLE!!!”

“What a wonderfull evening that was! I have seen audiences clapping for special acting skills before, and in this show people clapped and stopped the show for absolutely fantastic direction ideas by Tracie Pang. It was fireworks of splendid ideas, we went from one fascination to another. Actors were so quick and clever with high energy, music by Joel Nah and Rizal with very tasteful local touches. Congratulations, and double thumbs up to all.”

“Badass and beautiful and silly and shattering, Peter and the Starcatcher is the hilarious, heartbreaking origin tale of the Boy who will live forever and yet will never get to live fully. Thank you Pangdemonium, Tracie Pang, and the incomparable cast for that tour of a magical world that made me yearn to have that same choice again, and perhaps choose differently this time.”

“Something magical happened in the theatre last night. Thank you, Pangdemonium, for this amazing show!!! I really didn’t want it to end. I want to watch it again and again. Congratulations to the amazing cast and Creative team, you are all magicians!!!”

“A hilarious, witty, heartwarming tale with its silliness, humor, and absurdity dialed up to eleven. A magical two-hour journey filled with music, laughter, hope, and adventure. A fitting curtain closer to mark another great season for Pangdemonium.”

“Amazing show by Pangdemonium. The staging, acting, choreography and lighting were all inspiring. Clever, funny and great storytelling. My favourite Pangdemonium show so far.”

“Catch this joyful, hilarious and witty show regardless if you have the time or not! I've not lol-ed as much (literally) or felt so moved for ages, and I was thoroughly, thoroughly entertained by this energetic ensemble. It's highly physical and mesmerising.

The story, and the work that went into this production, are enough to mean you must catch it. I'm serious!”

“Pangdemonium ‘s Peter and the Starcatcher is a masterclass in directing (Tracie you are amazing), and the best ensemble in a show ever.

Don’t miss this marvellous display of talent, a show that reminds us to let our dreams take flight.”

“Rollicking fun! Amazing cast! Hilarious script, full of wonder and imagination! Please do catch Peter and the Starcatcher before they run out of tickets!

You will not be disappointed!”